In future, the modern-day history of Kazakhstan may be said to have changed irrevocably on one date: December 16, 2011.

That was the day when a peaceful demonstration by oil workers was deliberately fired upon by riot police in the town of Zhanaozen, a desert town of 80,000 people near the Caspian Sea.

The workers had been peacefully striking for basic trade union rights for seven months before the showdown on Dec. 16, which also coincided with the country’s 20th anniversary of independence from the Soviet Union. Although the Kazakh government put the death toll at 17, eyewitnesses, human rights activists and journalists had reported that more than 100 people were killed.

The killings marked a turning point, overshadowing January’s parliamentary elections and even drawing comparison to the 1905 Bloody Sunday massacre in St. Petersburg.

President Nursultan Nazarbayev’s government deployed thousands of troops to Zhanaozen, declaring a state of emergency and curfew that lasted until Jan. 31. Eyewitnesses say hundreds of workers are still imprisoned on charges of inciting mass riots and social strife, and of taking part in civil unrest. Against this backdrop, the first multi-party parliament emerged from the Jan. 15 elections. The pro-president Nur Otan Party, meaning Fatherland’s Ray of Light, received more than 80 percent of the vote. The rightwing liberal Ak Zhol Party won a few seats in parliament, as did the Communist People’s Party of Kazakhstan, but both are loyal to Nazarbayev.

U.S. Secretary of State Hillary Clinton was the first to congratulate the “Leader of the Nation” on the successful “democratization” of Kazakh society. But the OSCE Office for Democratic Institutions and Human Rights said the elections did not meet democratic standards. Kazakhstan chaired the OSCE in 2010.

The Communist Party of Kazakhstan was banned six months before the elections, while the Alga (Forward) Party, another democratic organization, has been trying unsuccessfully to register for the past five years. The only opposition party allowed to run, the All-National Social Democratic Party, failed to clear the 7 percent hurdle to enter parliament. In response to the official election results announced by the Central Elections Commission, the Social Democrats held protest rallies in central Almaty.

The latest rally, of 2,000 people, was held Jan. 28. People there also denounced the reprisals against workers in Zhanaozen and growing repression directed against the opposition and independent media.

The imprisoned leaders of the oil workers’ strike in Zhanaozen are now awaiting trial on charges of calling for the regime’s overthrow.

On Jan. 23, the National Security Committee arrested Vladimir Kozlov, leader of the unregistered Alga Party, for inciting social strife and organizing mass civil unrest. The same day, prominent human rights activist Vadim Kuramshin was arrested on the absurd charges of extorting money from a prosecutor. Kuramshin faces up to 15 years in prison.

Despite the brutal crackdown and suppression of basic rights, Nazarbayev can still count on the support of leading Western politicians. German Chancellor Angela Merkel and German business leaders recently signed contracts worth over $4 billion with Nazarbayev in a deal German magazine Der Spiegel wryly denounced as “raw materials in exchange for democracy.” The magazine said Vladimir Putin looked like a consistent democrat in comparison, because Nazarbayev has been in power since 1990.

The U.S. Ambassador to Kazakhstan, Kenneth Fairfax, assured Nazarbayev’s government of Washington’s loyalty, and sought to dispel suspicions of U.S. complicity in the events in western Kazakhstan. Fairfax said that, unlike Muammar Gaddafi and Bashar al-Assad, Nazarbayev is popular – and even adored. He added that Nazarbayev was far more democratic and progressive than Putin’s government.

The situation in Kazakhstan remains extremely tense, with various groups extremely apprehensive about what will happen next. There is an atmosphere of an impending crisis and a possible oil price slump, and the expectation that Kazakhstan’s people will begin a new wave of massive strikes and protests.

Ainur Kurmanov is co-leader of Socialist Movement Kazakhstan, a grassroots campaigning organization (www.socialismkz.info). The views expressed here are his own. 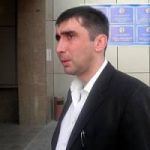